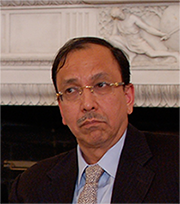 Sugata Bose is the Gardiner Professor of History at Harvard University. Bose has served as Director of Graduate Studies in History at Harvard and as the Founding Director of Harvard’s South Asia Institute. Bose was educated at Presidency College, Calcutta, and the University of Cambridge where he obtained his Ph.D. His scholarship has contributed to a deeper understanding of colonial and post-colonial political economy, the relation between rural and urban domains, inter-regional arenas of travel, trade and imagination across the Indian Ocean, and Indian ethical discourses, political philosophy and economic thought.

He has served as Chair of the Presidency Mentor Group advising on the rejuvenation of Presidency University as a world-class center of excellence and as a member of the Nalanda Governing Board. At the invitation of Mamata Banerjee, Chief Minister of West Bengal, he has agreed to contest the 16th Lok Sabha elections from the prestigious Jadavpur parliamentary constituency.

He has won election to Parliament in May 2014 by defeating his nearest rival by a margin of over 125,000 votes.